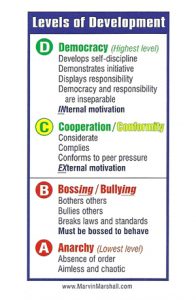 Although technically all motivation is internal, being able to articulate something outside of ourselves that prompts or motivates will help us make more responsible decisions.

Here is a quick review of the Levels of Development.

Introduction: “When I first came upon the concept of motivation described in the Levels of Development, it immediately grabbed my attention. This was the first time that I had ever seen anyone explain that behavior is actually all about motivation. The contrast between the two higher levels points this out perfectly. To me, the Levels of Development is absolutely brilliant, especially because of its simplicity. When something is simple enough that even children can understand it and yet so striking that many adults are stopped in their tracks by it, it’s got to be something worthwhile!” —Kerry Weisner, British Columbia, Canada

The Levels of Development has four levels (concepts). As with any hierarchy, the most advanced or highest level is placed at the top. NOTE: After the concepts have been taught, reference is made only to the LETTER. For example, the highest level is referred to as Level D.

LEVEL D – Democracy (highest level)
Develops self-discipline
Demonstrates initiative
Displays responsibility
Does good because it is the right thing to do
The motivation is INTERNAL.
The term “Democracy” is used because democracy and responsibility are inseparable.
Motivation at this level brings the most satisfaction and is the major contributor to healthy self-esteem.

A woman wrote me that when she left the food market and arrived at her car, she realized that she did not pay for the lime she was holding. No way did she want to walk back and pay the 10 cents. However, she knew the Levels of Development and reflected on what was the right thing to do. She walked back to the nearest cashier and apologized for leaving the market without paying the 10 cents. The cashier thanked her, and the woman said that the feeling of satisfaction was so strong that she felt compelled to share it with me.

We cooperate with others in order to live in a civilized society. Most of us live our lives at this level. Action at this level is often prompted by motivation to please others, receive a reward, or to avoid a negative consequence.

A danger exists at this level, however, when the young conform and comply to peer influence that may not be in society’s or in the person’s best interests. Example: a youth wants to belong to a group of peers who all smoke. What do you think the youth will do to be like and liked by the others? The youth will be prompted by external motivation—to conform to the others and will start smoking.

The difference between Level D and Level C is in the motivation—rather than in the behavior. Another example: A youngster is asked (Level C –external motivation) to pick up trash. However, if the person sees the trash and takes the initiative to pick it up WITHOUT BEING ASKED, the motivation would be Level D. The action of disposing the trash is identical in both C and D; the difference is in the motivation. NOTE: Level C is expected. Level D is voluntary. The objective is for young people to reflect on their motivation: EXternal vs. INternal.

These two higher Levels of Development refer to MOTIVATION and are BOTH acceptable—and describe how most of us live our lives most of the time.

The two lower Levels of Development refer to BEHAVIOR are NOT acceptable.

LEVEL B – Bullying/Bossing
Bosses others
Bothers others
Bullies others
Breaks laws and makes own standards
Must be bossed to behave
This level is characterized by a lack of impulse control, a lack of consideration for others, and by displaying inappropriate behaviors. When behaving at this level the young are sending the message, “Control us because we are not capable of controlling ourselves.”

LEVEL A – Anarchy (lowest level)
Absence of order
Aimless and chaotic
Absence of government
This level is characterized by chaos, being out of control, or unsafe.
Anarchy is the fundamental enemy of civilization.

The stories and illustrations in Children of Rainbow School will give you greater understanding of these four concepts and the reason that Level D (internal motivation) is the most satisfying of all rewards—taking the initiative and doing what is right simply because it is the right thing to do.

More insightful tips on how to manage stress and improve relationships are in my book, “Live Without Stress: How to Enjoy the Journey”—available in the WithoutStress.com Shop. You will learn how to manage your mind, reduce your stress, and live longer.