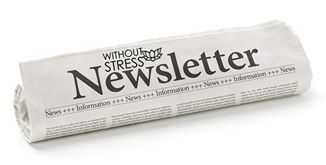 “They said I couldn’t sing, but they didn’t say I didn’t sing.”
—Meryl Streep after singing at Carnegie Hall from the movie “Florence Foster Jenkins”

PiperPress has been updated so viewers can now easily see the FREE downloads.

I received the following email last week and include it in this section because it illustrates how using the “Without Stress” approach not only reduces stress in all parties but also promotes responsible behavior, promotes efficiency, and is devoid of negative effects on relationships.

A number of years ago you presented in Christchurch, New Zealand. I really enjoyed listening to your ideas. I receive your monthly newsletter and often quote your ideas to my teaching team.

Recently we celebrated a child turning five and heading off to school. Her family brought in a birthday cake to share with all the children. During the leaving ceremony, four boys chose not to show respect by not listening to the birthday girl. This is a well-known part of our farewell procedure. After our mat time was finished I spoke to one of the boys and told him I didn’t know what to do about the cake as he chose not to show respect and listen.

I asked, “How much of the time did you show respect?” He said, “About half the time.” I asked, “What do you think I should do about the cake?” He said, “Just give me half a piece.”

I went on to speak to the other three boys and posed the same questions letting them know what their friend had decided. They all asked for only half a piece of cake, too. I asked if they thought this was fair, and they all said yes.

Aren’t four-year-olds wonderful, and isn’t eliciting responses so much easier than imposing punishment that could cause ill feelings and more disruptive behaviour. Thanks again for your great advice.

Behavior Modification or behaviorism in the form of PBIS is widely used in schools and homes.

In fact, this approach of catching kids dong what the teacher wants and then giving rewards to reinforce the behavior is still mandated by United States’ school administrators around the country.

Ask any teacher who has implemented this external approach in the form of PBIS (Positive Behavior and Intervention Supports) to promote responsible behavior and you will hear that, after using this approach for any length of time, it becomes counterproductive. PBIS fails in a number of ways in terms of promoting responsibility.

B.F. Skinner of Harvard University was the theorist whom educators followed. He used behavior modification to train rodents and pigeons and then extrapolated that this approach would also work on humans. The approach COMPLETELY excludes any recognition of “internal” motivation. Neuroscientists and experts on human motivation do not use external approaches to motivate towards internal motivation.

Stephen Covey, in his classic book, 7 Habits of Highly Successful People, stated, “In all my experiences, I have never seen lasting solutions to problems, lasting happiness and success, that came from the outside in.”

In addition, this outmoded approach relies on some other person. What happens when no adult is around to give a reward when a young person acts responsibly?

Read how Tom Sawyer was a better psychologist than B.F. Skinner and how internal motivation is so much more effective than behaviorism with its new name of PBIS. Learn more.

French psychiatrist and philosopher Pierre Janet pioneered guided imagery, sometimes called “visualization,” in the 1890s. It developed from the discovery that a person’s imagination can affect his or her inner state of being. Certain images stimulate the parasympathetic nervous system to experience feelings of calm and well-being.

Many professionals, including therapists and sports psychologists, now suggest the practice for a variety of purposes.

The next time you want to improve your efficiency and effectiveness, visualize doing the behavior BEFORE actually engaging in it.

An important concept for all to remember regarding relationships: Not losing is more important than winning.

People’s desires will not always be fulfilled, but as long as others are aware that they have a choice as to their responses, they are not put in a position where they feel that they lose—which naturally prompts negative feelings.

No one likes being cornered, literally or figuratively. The belief of not having a choice encourages resistance because it prompts a feeling of being trapped. When a person feels there are no options, the result is not only resistance but also resentment. By contrast, offering choices ensures that a person’s power and dignity are retained.

You will be choosing a losing situation whenever you focus on the past and project negativity, as in, “Why did you do that?” In contrast, you can choose to focus on the future by being optimistic and positive and by suggesting a procedure or asking, “What can you do to prevent it from happening again?”

If you choose to talk about what a person did wrong, the person will only resent it because the situation cannot be undone. Choosing to focus on the past will only result in your criticizing, blaming, complaining, threatening, or punishing. These will result in stress and negative feelings for all involved.

In contrast, you will promote responsible behavior and retain good relationships if you choose to communicate in terms of, “So, let’s talk about what has been learned and how to do it better next time.” When you do, you will immediately become a coach instead of a critic or cop.

Fear is usually a by-product of negative thoughts.

We have an innate capacity for fear; however, HOW we respond to fear is conditioned not only by our experiences but also by our thinking.

In 1919 psychologist John B. Watson conducted a controversial experiment to see whether fear could be learned. A young boy he called “Little Albert” was shown different creatures including a rat. At first, Albert showed no fear of the rat.

Then Watson paired the exposure with an aversive sound that scared the little boy. Soon, “Little Albert” would react with fear at just the sight of the rat alone. His fear even generalized to other furry creatures.

You can reduce your fear by associating positive experiences with the things you fear. The process is referred to as “fear extinction.” So face your fears. They may have been stimulated by association as we found by the “Little Albert” experiments. Use fear extinction by using guided imagery.

Here is a sentence to add to your wisdom collection:

“To get what you want to do, you need to do what you DON’T want to do.”

A successful life consists of battling one’s nature in a number of ways—and that includes what you don’t want to do.

Sometime I don’t want to write. But if I want to share and reap the satisfaction of sharing what I have learned, I need to write even if I don’t want to.

Respond with, I understand that you don’t want to, but it doesn’t matter.

You now know how to respond.

Here is an exercise to differentiate Level D from Level C in the Hierarchy of Social Development:

Scenario one:
A chair is on its side and I ask or tell you to pick it up and place it under the desk. Then have the students volunteer how they FELT when you asked them. Remind them that the chair was picked up—but you are only interested in how they FELT when doing so.

Scenario two:
A chair is on its side. Each person is the first one in the room. The teacher does not see you enter because the teacher is focused writing something on the white or chalk board. You see the chair on its side and take the INITIATIVE to pick it up and place it under the desk where it belongs.

Point: People will never get the feeling of satisfaction from Level C (cooperation/obedience—first scenario) that they will get from the second scenario, Level D (Democracy, which is inseparable from responsibility.)

Students learn that the good feelings emanating from Level D motivation—taking the initiative to do the right thing just because it is the righting to do—will always be more satisfying than motivation at Level C (obedience).

9. WHAT PEOPLE ARE SAYING

Thank you so very much for providing Professional Development for our school. The campus climate is so much different, already!

REPOSTS and REPRINTS: We encourage sharing this newsletter. Permission is also granted to repost or reprint the newsletters in whole or in part as long as Marvin Marshall is cited.

PRIVACY STATEMENT: Your address will always be kept confidential and will not be released to anyone.

TO SUBSCRIBE: If you received this issue as a forward and would like to receive your own newsletter, enter your email address in the footer at http://WithoutStress.com/

TO UNSUBSCRIBE or CHANGE your email address, click on