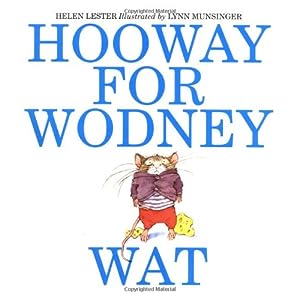 Hooway for Wodney Rat by Helen Lester is a great read-aloud, especially if you like taking on different voices!!

Camilla Capybara is a perfect character for introducing the concept of Level B of the DWS Hierarchy.  Once the kids have correctly identified Camilla’s level of operation, the illustrations really lend themselves to discussing the outcomes and natural consequences of operating on Level B.

You could even sneak in a discussion about Level D on a second reading of this book.  What if one of these classmates suddenly chose to act on the highest level?  What actions might they take?

It’s also possible to discuss Levels C and D further.  Wodney is very much concerned with what others think in the beginning––basing his opinion of himself on external factors.  He “allows” the other students to bully him by playing along with their game of making him say difficult words.   When he starts to act with more confidence himself though, he finds that the others stop bugging him and come to respect him.  By the end he is self-reliant and feels a strong sense of himself––he’s motivated on Level D!  It would be interesting to point out to kids that Wodney’s speech difficulty doesn’t improve at all over the course of the story, but his attitude does! That makes all the difference for him.  It’s not likely he’ll allow himself to become a victim again.

What a great book!

By the way, for very young primary children early in the year, there’s too much analyzing, in what I’ve outlined above.  At the start of a school year, this book might be best used to introduce Level B. Later in the year, the book could revisited for a deeper discussion.