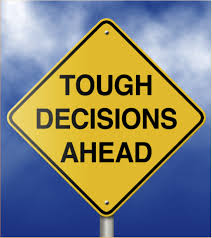 Making tough decisions can be stressful. Let’s assume you are confronted with making hard decisions but have trouble making decisions. Yet, it is possible to reduce stress and anxiety when solving problems and decision-making by having a positive mindset.

Success in almost any undertaking requires that you engage in risk-taking and that with each risk comes the element of fear.

If you cower before making a tough decision, you will have a negative disposition, which may limit you options. If you meet a decision boldly, letting it motivate you to action, your success in decision-making increases.

Think of the founding of the United States of America. The country was built on risk. The idea that people could govern themselves was a unique concept in the 1700’s. At that time a king, feudal lord, or someone who had power over people governed in every country or civilization on earth. The risk that our founding fathers took altered the history of the world. Obviously, they had a positive outlook for their tough decision-making. They turned the world upside down with the idea that mankind was capable of governing itself—that the power rests in the people, who in turn, create governments to represent them.

Think of a tough decision you have made in your life that turned out to be successful. Reflect! Did you go into it with a negative or positive disposition? Chances are that your success depended, at least in part, on your attitude when you made the decision.

The process of growing and learning always involves risk. Everything from the smallest entrepreneurial business to our space program was built on it.

So, when making a hard or tough decision, use the following perspective: Ask yourself, “What would be the worst thing than can happen?” If you can live with the worst than can happen, then it becomes easier to make the decision and your stress will be reduced.

Tip: Be bold and confident in order to reduce your stress when making tough decisions.