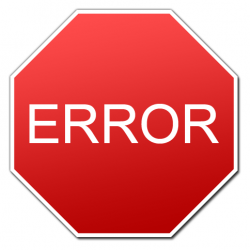 You cannot learn and be perfect at the same time.

Reduce stress by not fearing errors. You can mentally manage stress errors and relieve stress when you learn that an error is a learning opportunity.

Let’s take the case of the little boy who is mounting a bicycle for the first time. He grabs hold of the handlebars. He swings his left foot over the bar to the opposite side of the bike, and plants that foot on the ground. Both feet are now straddling the ground. He then mounts the seat. The child lifts his feet into the stirrups and the entire bike wobbles. The child pushes off and the bike veers sideways, turns on its side, and the boy falls off. Mistake number one; lesson learned.

The boy picks himself up and mounts the bike again. He is intent on learning how to ride that bike. He tries again. He doesn’t focus on the past. He naturally looks toward the future, toward what he wants. With the second attempt, he pushes down on the pedals, and the bike moves forward—but not hard enough. Again, the bike wobbles, veers sideways, and he falls. Another error, but he notices the  improvement.

Focusing on the past in this scenario would sound stressful and self-scolding as in, “I’ll never be able to ride a bike!” However, focusing on the future, he thinks, “What can I do better next time so I will be able to ride the bike?” By pushing harder, he learned and embraced his mistake because he took another opportunity and was able to balance the bike and find success.

Wise adults know that we don’t have to be prisoners of errors from our past.

The most effective approach is to have the mindset that making errors is one of the best ways to learn. The reason is rather simple: People don’t learn from what they already know or can do.

To quote Albert Einstein: “Anyone who has never made a mistake has never tried anything new.”

And here is one of my own personal thoughts on the topic of stress and errors by Bernard Baruch.

Tip: Reduce your stress by thinking that every error is a learning opportunity.