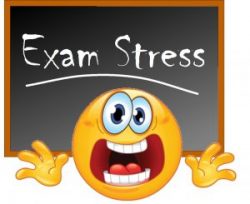 Schools and teachers are under a lot of pressure to meet standards. The pressure of taking standardized tests gets passed on to students.

Standardized tests can create crippling anxiety in students, and anxious kids perform below their true abilities. Students with test anxiety manage to get something down on paper, but their capacity to think clearly and solve problems accurately is reduced by their nervousness. This anxiety can expand to college admissions exams and lead to reduced motivation.

Even little kids aren’t immune to test anxiety. Researchers have seen evidence of it in students as young as first and second graders. Their worries tend to manifest in nonverbal signs such as stomach aces, difficulty sleeping, and a persistent urge to leave the classroom to go to the bathroom.

Apprehension about tests can be especially common among minority and female students. That’s because the prospect of evaluation poses for them what psychologists call stereotype threats—the possibility that a poor performance will confirm negative assumptions about the group to which they belong.

One step all students can take to improve their performance on tests is to change how they study for them.

One of the most common sights on high school and college campuses is that of students poring over textbooks, yellow marker in hand, high-lighting pertinent passages which often end up including most of the page. Later in the semester, to prepare for their exams, students hit the textbooks again, rereading the yellow blocks of text. Yet, studies have shown that highlighting and rereading text is among the least effective ways for students to remember the content of what they have read.

While reviewing class notes and textbooks can familiarize students with the material on a test, it doesn’t help them take the exam. A better approach is to view test taking more like a play, where you practice in a way that replicates the format and time limit of the exam helps. Think of it like a dress rehearsal. You would never just read over your lines and then show up on the opening night of a school play. It’s the same thing with a test. To be ready for it, practice doing what you’ll have to do in the test-taking situation.

In other words, quiz yourself rather than just read. In one study, students who read a text once and then tried to recall it in quiz format on three occasions scored 50 percent higher on exams than students who read the text and then reread it three times.

Asking questions to recall information is an aspect of reflection, which is one of the most effective practices for success in any aspect of life and learning and an integral part of the Discipline Without Stress approach.

Teaching, parenting, and simply living can be stressful at times. That’s why I wrote my newest book Live Without Stress: How to Enjoy the Journey. If you’re looking for stress management advice, check it out. The book is available as a print book (Buy one and get a second copy free to give as a gift), as an eBook, and as an audio book at PiperPress.com.