Do What You Love to Reduce Stress 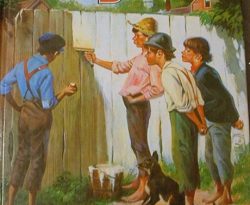 We’re often told, “Do what you love.” It’s great advice, because when you love what you’re doing, you can often reduce stress. But what if you have to do something you don’t love? Can it still be enjoyable?

Let’s take a lesson from Tom Sawyer to see how you can turn situations around.

A Lesson on How to Reduce Stress

Tom Sawyer had the responsibility of whitewashing Aunt Polly’s front picket fence. The fence was 30 yards wide and 9 feet high. Most people would agree this wouldn’t be a fun task.

On Saturday morning, Tom was whitewashing the fence when he saw Ben approaching. Tom put on a smile and showed Ben how he was really enjoying the activity.

Ben, on his way to the swimming hole, approached Tom and said, “Pity you’ve got to work on Saturday morning; I’m on my way to go swimming.”

Tom responded, “Sorry Ben, but you don’t understand. Work is something you are obliged to do. Besides I don’t think there is more than one person in one thousand—maybe in two thousand—who can whitewash Aunt Polly’s fence the way she wants it. She isn’t too particular about her back fence, but she is very particular about her front fence—right here on the street.”

Tom responded, “I’m not sure. If the whitewash isn’t done exactly the way Aunt Polly wants it, she’ll be very angry.”

Tom responded with reluctance on his face, “Okay, but be very careful; otherwise, you can’t do it.”

Tom, with Ben at his side, eagerly continued whitewashing the fence.

A few minutes later, another teenager was walking toward the swimming hole when he came upon Tom and Ben having a good time.

The same scene was reenacted—again, again, and again.

Before long, Tom was sitting under an apple tree counting his bounty while a bunch of boys—whose intentions that Saturday morning were to go swimming—found themselves eagerly whitewashing Aunt Polly’s picket fence.

Reduce Stress with This One Tip