Why Everyone Should Know the Levels of Development 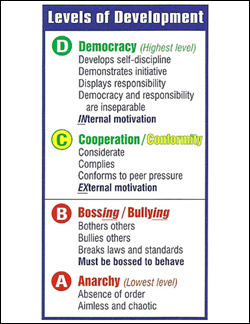 For years I’ve focused the teachings of my Levels of Development on students and schools. But in reality, the Levels of Development is a tool appropriate for every person of every age from every walk of life. In fact, when people become aware of the levels, they become conscious of their own behaviors, their decisions, and their relationships with others.

Here are the 4 main ways the Levels of Development helps all people.

1. Serves as a means of communication

The Levels of Development offers everyone—adults and youth—the same conceptual vocabulary. This helps bring clarity of understanding and assists communications between all people, whether it’s between a teacher and student, parent and child, or even two co-workers.

The Levels of Development empowers people. It sets the groundwork for people to be able to analyze and correct their own behaviors. It shows them they can be in control of their lives, be agents of their own empowerment, and can resist the victimhood mentality.

Realize that age doesn’t always equal maturity. Even adults make immature decisions at times. Exposing people to the Levels of Development has a natural effect of encouraging them to think about long-term decisions. This is a significant consideration since so much advertising and peer pressure is aimed at instant gratification rather than at fostering social responsibility and growth.

A fundamental advantage of the Levels of Development is that it naturally accomplishes what adults talk about but have a most difficult time in accomplishing, namely, separating a person’s behavior from the person him/herself. For example, reflect on the last time you were evaluated. Did you separate what the evaluator was telling you about your performance from you as a person? While the evaluation session was taking place, were you aware that the supervisor was not really talking about you personally, just about your on-the-job actions? My surveys with hundreds of adults have indicated that only an extremely small number of people consciously separate themselves from their behavior during an evaluation. If the separation is difficult for adults, imagine how much more difficult it is for young people.

Even though we try desperately to make it clear to a young person that we are not criticizing them personally—that we are just not approving inappropriate behavior—it is extremely difficult for a young person to perceive the difference. Teaching and embodying the Levels of Development make this challenging task quite easy. We never talk about a person’s behavior; we only talk about the level of behavior.

Tip: The Levels of Development isn’t just for kids. No matter what your age, learn the levels and embody them daily. When you do, you’ll be a role model for others—both young and old.